Goose qualifies for the US Open 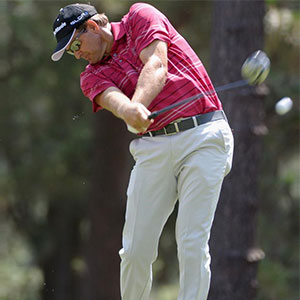 After winning the US Open in 2001 and 2004, Retief Goosen is soaring back after smoothly qualifying for the competition which takes place at Chambers Bay, south of Seattle in Washington state, on June 18.

On Monday, 800 players around the United States battled it out in 36-hole qualifiers held at 10 venues. Goosen, who was one of those players fighting to qualify, achieved a final-round card of six-under-par at Germantown Country Club and Ridgeway Country Club in Memphis – to be the last of 10 players to get into the second major of 2015 from that qualifier.

Other big names to qualify on Monday included Lee Janzen, who won the US Open in 1993 and 1998, and former World No.1 Luke Donald, who is back in the US Open for the first time in 11 years.

The feel-good atmosphere which surrounds Goosen right now is only justified. It is vindication for a man who battled and overcame a career-threatening injury in the peak of his game rising up for one last stab at the big time.

Goosen, who has been playing with TaylorMade equipment for the last 16 years and wears adidas and Ashworth attire, expressed how glad he felt after coming through something as horrible as the injuries which wracked his body for so long.

“When I went in for surgery, I was saying to my wife that I physically can’t play golf anymore,” he said after the third round of February’s Nortthern Trust Open.

“I’m very happy with the way that’s turned out. It’s now been pretty much almost two-and-a-half years since surgery. My back’s feeling great. I have zero back pain. I wish I was 10 years younger, but you know, I feel like I can swing the club again. But, yeah, I mean, the surgery has given me a second life, and hopefully continue to play for a few years to come.”