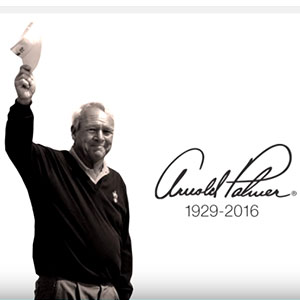 The golfing world is mourning one of the game’s best ever players, Arnold Palmer, after he passed away due to heart complications at the age of 87.

Palmer is widely regarded as golf’s first superstar – earning the nickname ‘The King’ by putting on his own brand of charisma on the golf course. He attracted legions of fans at his peak with a thrilling style which captured the imagination of millions around the world.

Born in Latrobe, Pennsylvania in 1929, Palmer began turning heads around the same time that television was becoming more widespread in homes. It was here, in black and white, that the man’s true skills were brought to the fore and a legend was born on the greens.

Palmer has won seven major championships, including four Masters titles. He was part of the ‘Big Three’ as his scintillating rivalry with Jack Nicklaus and Gary Player dominated the greens throughout the 1960’s and 1970’s.

He earned 95 professional victories worldwide, with 62 wins on the PGA Tour. He was also the first sporting client for pioneering agent Mark McCormack, the founder of the International Management Group.

It is also said that Palmer was at the forefront of ensuring The Open Championship remained one of the pre-eminent tournaments on the world calendar despite many other leading Americans at the time being reluctant to make the arduous journey across the pond.

Palmer was a regular visitor to the British Isles, and had his name proudly engraved on the Claret Jug in each of the two years of making his debut at St Andrews in 1960.

He made more headlines by becoming one of the very first golfers to host his own tournament on the PGA Tour, creating the Arnold Palmer Invitational at Bay Hill in Florida – a club he purchased in 1974. It has been an annual fixture on the schedule since 1979.

He made his 50th consecutive, and sadly final, appearance at Augusta National in 2004 and was named an honorary starter at the Masters in 2007, later being joined in the role by Nicklaus and Player, his friends and former opponents.

Ill-health was the precursor for his missing tournaments over the last year, and he was too frail to hit his ceremonial tee-shot at this year’s Masters although he was present on the tee to watch his two long-time friends and rivals officially open the tournament.

The CEO of Arnold Palmer Enterprises, Alastair Johnson, confirmed that Palmer passed away in Pittsburgh due to complications from a heart problem. He had been admitted to hospital on Thursday for tests, but his condition deteriorated significantly over the weekend and the sad news began reaching the golfing community late last night and this morning.

From everyone here at OnlineGolf, we would like to send our condolences and sincerest wishes to Arnold Palmer’s family, friends and colleagues.