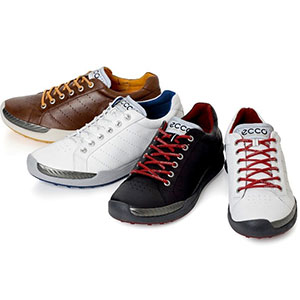 Ecco Golf, one of the leading manufacturers of innovative golf footwear, has announced that it has been named ‘Official Footwear Supplier’ to The 2015 European Solheim Cup team.

Ecco will also be providing shoes to the defending champions’ caddies and team staff as it enjoys the honour of supporting Team Europe in the competition for the fifth time.

The competition will be held 18-20 September at the St. Leon course of Golf Club St. Leon-Rot, St. Leon-Rot, Baden-Württemberg, Germany.

“ECCO is renowned for its uncompromising quality, innovative technology and Scandinavian design philosophy,” says Eicko Schulz-Hanßen, Director of Golf Club St. Leon-Rot. “We will need these values at The 2015 Solheim Cup to make sure that Team Europe is best prepared.”

Jesper Thuen, Global Marketing Manager – ECCO Golf Lab, said: “This truly unique event has proven to be an exceptional showcase for the ECCO Golf collection and our company’s commitment to the women’s game. With our side looking for its third-straight win, golf fans throughout Europe will be tuned in and rooting them on.”


Get your ECCO Golf shoes at OnlineGolf today, available in men and women’s styles.