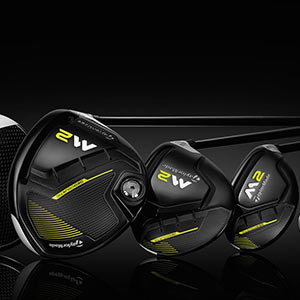 The 2017 TaylorMade Golf M Series arrives in January, and features brand new drivers and irons for players who loved the feel and performance of the brand’s previous M1 & M2 ranges.

The 2017 M1 and M2 drivers deliver more distance and greater forgiveness through reimagined multi-material construction, and can be personalised with premium shaft options.

The new T-Track system comes with 27 grams of moveable weight which allows for 64% more front-to-back CG movement than the original M1. Now golfers can achieve greater adjustability and precise golf ball flight control on every shot.

The M1 driver has a precision-fit carbon crown and new carbon toe panel which helps to free up discretionary weight so it can be relocated for lower center of gravity (CG). It is this extra 43% of carbon fiber which really helps promote incredible distances.

The M2 driver brings forth a new level of distance and forgiveness for golfers thanks to its all-new geocoustic sole shaping, which unlocks performance through advanced geometry. This means the 2017 M2 driver’s sunken sole shape enables a larger clubface with added forgiveness.

Geocoustic sound management has also been introduced. This advanced sole-shaping with external sound ribs optimises vibration for exceptional sound and feel whenever the golf ball is struck. 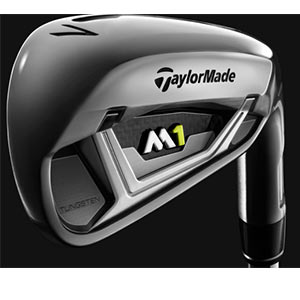 The 2017 TaylorMade M1 irons are all about control in every shot, and its Face Slot technology maximises distance and forgiveness. Face Slots preserve golf ball speed on shots struck toward the heel or toe, making every mis-hits better and a golfers’ best shots nothing short of extraordinary.

The M1 irons’ lower CG, Geocoustic engineering, and the addition of Face Slots combine to make it most technologically advanced iron ever produced. It has a low-profile, multi-material head construction with more workability and control, so players always feel on top of their performances.

If the M1 irons deal with control, the M2 Irons excel when it comes to excellent levels of forgiveness. Its Face Slots provide added forgiveness by promoting a tighter dispersion on shots struck toward the heel or toe, while Speed Pocket technology helps preserve golf ball speed on shots struck below center to produce greater distance and consistency on mis-hits.

The new M2 irons’ re-designed fluted hosel frees up discretionary weight and relocates it for lower CG, which produces higher launch with more forgiveness. The mass from the topline has also been removed and repositioned for lower CG. Internal sound ribs actively manage unwanted pitches for optimal sound and feel.

Geometric construction and acoustic engineering are brought together in a multi-material badge, which dampens unpleasant pitches for confidence-inducing sound and feel. 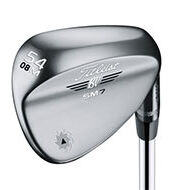 The SM7 Titleist wedge puts the highest level of performance straight into the hands of the player, giving them the ability and the confidence to make every play count. 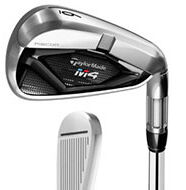 TaylorMade has unveiled its newest creation, the M3 and M4 golf irons. They have been made using an array of key performance technologies to help impact and improve the performances of its players.